We left Yuma and headed to California.  We ended up at Mission Bay RV Park, which was on Passport America.  The location was great, with lots of walking areas along the bay, but the campground was just OK.  Bathrooms were old and the camping was on asphalt with little space between rigs.  The weather was beautiful while we were there, so we did lots of site seeing.  Sadie’s favorite thing was to walk along the water and watch the ducks.  One day she even saw a squirrel run across the lawn and down into the rocks along the water.  From that time on she always wanted to go and see if that squirrel was still there.

We drove around the Mission Bay area and saw a huge roller coaster that John remembers going on when he was young.  It was right along the boardwalk. 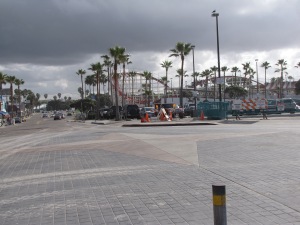 While driving around I checked Yelp for a place to eat and found the Pacific Beach Fish Shop, which was fabulous.  The first day we went for fish tacos and the owner sent over some smoked salmon.  It was so good we went back the following day and again had fish tacos and the owner sent over blackened shrimp.  We purchased seared ahi, halibut, and smoked salmon from the fish market and took it back to the rig.  We were so happy to have fresh fish. 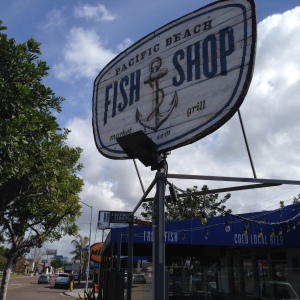 We stayed here for 4 nights and then headed to the Elks in El Cajon.

As the days wore on more and more Lazy Daze rigs showed up here at Quartzsite.  There were also 2 other SOB rigs.  In the mornings the dogs came out to play.  Here are some pictures of Sadie’s playmates. 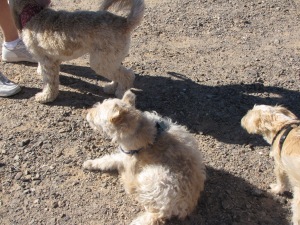 We left the hustle, bustle and dust of Quartzsite on Friday, January 24th, and headed to the Imperial Dam, South Mesa to meet up with Cookie and Frank.  Before the week was over, Jim M., Faith/Jim, Kevin/Malia and Linda/Bob also showed up there.  It was a great site with a view of the river and lots of friendly neighbors, kind of like a neighborhood.  They even had a library set up in an Airstream.  Great sunsets as well. 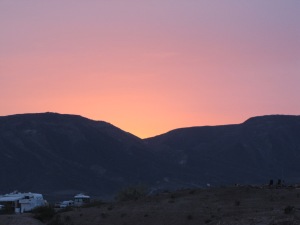 We even met some of the famous 4-legged residents. They weren’t as friendly as the 2-legged variety.