We hit the road on December 26, 2013, with a stop at the Enchanted Trails RV Park in Albuquerque and then the Escapees North Ranch.  We arrived at my sister’s house in Palm Springs, CA to spend the New Years holiday.  We had great food and fun with my sister, Doris, and brother-in-law Ford.  We also got to see our nephew Troy, his wife Michele, and their boys Gavin and Everett.

One day we met up with John’s sister, Janice, and brother, David, who live in Big Bear.  Along with John’s other brother, Richard, and his wife Sandy and my sister and brother-in-law we all met at Bob’s Big Boy in Calimesa, CA.  It was great for John to see his siblings; it had been several years since they had all been together.

On January 4, 2014 (hard to believe it’s already 2014) we met up with Roger and headed to Quartzsite for our annual get together at Roger’s Half Acre.  The first day 5 rigs were here and by yesterday we were up to 8.  Going to be many more before the Big Tent starts on January 18.  It is quite an experience to walk around that huge tent to see everything you thought you never needed, but maybe do. 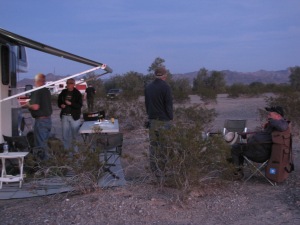 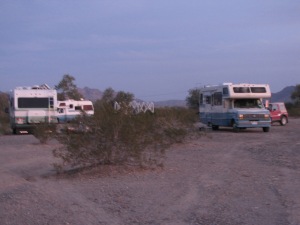 2 thoughts on “Hitting the Road Again”